*Vogelfrei is a German term that once was used to describe someone who is  “free as a bird.” Yet the connotation changed over time. In high school, I learned in history class that it meant a person without rights, outlawed. Being declared an outlaw meant society had the right to kill the person without consequence. Back in those days, I could have never imagined living that experience. But now I can. 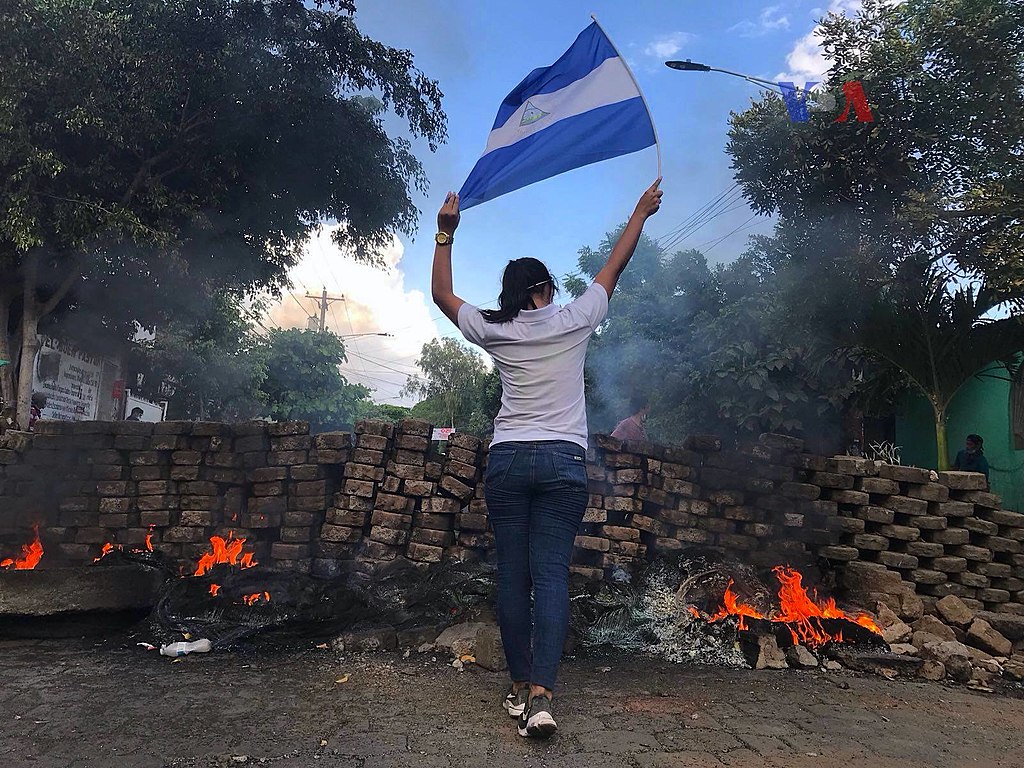 What is going on in Nicaragua?

Police cars full of armed special forces suddenly appeared on the streets, TV channels were blocked, electricity cut, roads blocked, all information on every channel intensified and the first person was killed, a protester without any weapon.

A high school boy went out to help some students. He was shot. He was transported to the hospital and denied care upon arrival. This was an order from above. Who takes part in the protest has no right of attendance. Before dying he repeated: it hurts to breathe.

This is how Nicaragua is feeling – it hurts to breathe.

I woke up from the ignorance I was living. That day I realized things are not going to be alright.

I received a video on social media without knowing the content. It was something normal, the kind of thing a friend you trust sends. I opened it. But this time, it was different, because it was already part of a world I was ignoring.

It was the murder of Angel Gahona, a journalist. He filmed his own death. The video shows Gahona talking about a confrontation between the police and some protesters in the city of Bluefields. He shows the damage and violence the paramilitary groups created. Suddenly his phone falls, and you hear a woman screaming his name in a blood-curdling tone. In the last clip, he is lying dead on the street with a bullet hole in his eye.

Then it became regular…

A man picked up a phone call from a trusted friend who said that another friend had an accident. Worried for his friend, the man left his house and was shot the minute he arrived at the there.

Students confronting heavy armed police and paramilitaries with nothing but only screaming: “Nicaragua will be free again.” Two of them were killed after fifteen-hours of gunfire at the UNAN University in Managua.  Many others disappeared. Some fled to Costa Rica, and some were caught. Nine of them are accused of terrorism and are now awaiting trial.

A scream stuck in my throat.​ An image appears in my mind: blood running down the streets, coloring the asphalt and lifeless bodies. Then tears starts to fall down on my cheeks. Breathing feels heavy and my chest starts to hurt. I can not move and a sense of sadness fills my heart. The tears will keep running just like the killings and the news. This is going to stay. This is going to mark me for the rest of my life.

The government is playing war and celebrating victories over unarmed people.

Like the fairy tales from the Brothers Grimms, the witch burns, kills, eats kids, babies, old and young people. Many countries have suffered similar situations for decades. We can find witches with their own fairy tales everywhere, but today they are called world leaders who decide about our life and we choose the comfort, instead of speaking out loud and to protest, to fight for our human rights.

Many use social media to become a star of our very own narcissistic world. When confronted with news, crisis, discrimination or crimes, we only post if it has the ‘right’ hashtag, so that our followers think we care and have a social side. But do we really?

Plastics with no souls

Western modernity has rendered the people into plastics with no soul. Is this really where we want to go? Because one day we could all be in a situation, where we are vogelfrei. Just like the young girl I was back then. I couldn’t imagine to ever be in a similar situation. You can find yourself in a nightmare, and you want to wake up.

Most of the people are privileged, including me, to be able to make jokes about Kim Jong-Un while sipping on matcha lattes in a coffee shop, forgetting about those. They live a life without choice because someone in somewhere decides what to make out of their lives. Of course, there is nothing wrong with enjoying matcha in a coffee shop, but we should stop double facing and be conscious of the road we choose daily.

Editor’s note: This article was originally written in December 2018 but we’ve waited to publish it until we could confirm that it would not put our contributor into a risk which ironically means that she is no longer living in Nicaragua. Because of the same security reasons pseudonym was used instead of the real name of the contributor. The article was voluntarily revised by 3 different editors from Kopuntu Network.